One of the advantages of having a "normal" job is that I get federal holidays off. Somewhat of a mixed blessing, in reality, but as an end result, I ended up with a 3 day weekend for the 4th of July. I decided to take the opportunity to climb another 14er, since I would have plenty of time to recover.

Mt. Massive is the 3rd highest mountain in the continental US (Mt. Whitney in California and Mt. Elbert, the next mountain south in the Sawatch Range in Colorado are the two higher). At 14,421 feet above sea level, and with several subpeaks extending miles to the north, it dominates the horizon in Leadville. There are two main routes used to climb this mountain. The first, and most popular, is the east slopes. This route is about 14.5 miles round trip with 4500 feet of elevation gain. The second, and much less popular, is the southwest slopes. Ascending the mountain via this route is much shorter, at only a reported 7.25 miles round trip, but fits almost as much elevation gain into that distance. As it was a holiday weekend, and the mountains have been much busier than normal in the post-lockdown world, I decided to follow the trail less traveled. 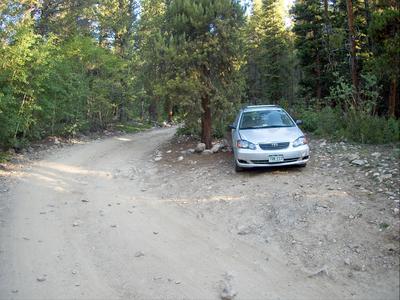 The day began very early. While there are options for dispersal camping near the trailhead, most weekends this year there has been an overload of people camping. Instead of trying to find a camp site as night fell, I decided to drive from Colorado Springs the morning of the hike. THe day began at 4 am and, as expected, the drive was uneventful. Most of the camping sites along Halfmoon road were packed and the official campgrounds were full. The Mt. ELbert trailhead was also completely full, with cars parked along the road for close to half a mile on either side. The standard trailhead for Mt. Massive actually looked like it had a few spaces left when I passed it a little before 7 am.

While Halfmoon Road is listed as a high clearance/4WD road for most of its length, it is generally navigable by a higher clearance passenger car until the last half mile or so. At that point, the road suddenly goes up a fairly steep rocky hill. I decided to park at the bottom as there were a lot of other cars parked there, some of them much more rugged looking than mine. In reality, there was only one spot on the road that I would not have been able to manage, but turning around would have been close to impossible, so I'm very glad I parked where I did. I'm not sure if smaller SUVs would have been able to make it through the one rough spot, as it required a fair amount of clearance, but I think most trucks with 4WD would make it without problems.

The actual trailhead was about 0.7 kilometers from where I parked and required climbing about 300 vertical feet. The thermometer in my car read 37 degrees fahrenheit, so this gave a good warmup. From the actual trailhead, I entered the wilderness area within a few hundered meters. The initial portion of the trail was fairly moderate in grade. People with somewhat better fitness than I have would be able to run it with no difficulty. I was able to run about half of it, walking the steeper uphills.

At about 2 kilometers from the trailhead, the trail starts to cross a meadow. Part of the meadow is actually the end of an avalanch, so there are lots of broken trees, but as the trail continues along the meadow, the views of the surrounding mountains really open up. Excellent views of Mt. Oklahoma and Deer Mountain along with the basin below them can be had. At the time I was hiking up the valley, the sun was just starting to hit the mountains, giving great light for pictures.

At 2.5 kilometers from the trailhead, the Mt. Massive Southwest Slopes trail splits off from the North Halfmoon trail. The North Halfmoon trail continues up the valley and eventually leads to some alpine lakes on the western slopes of Mt. Massive. When viewed from the top of the mountain, the lakes look very pretty so I do have intentions of returning and hiking to them. There also appears to be a sub-alpine lake in the basin below Deer Mountain that looked very pretty. No official trail leads to it, but if you can find a way across Halfmoon Creek, it looks like it would be a fun exploration to hike to it. 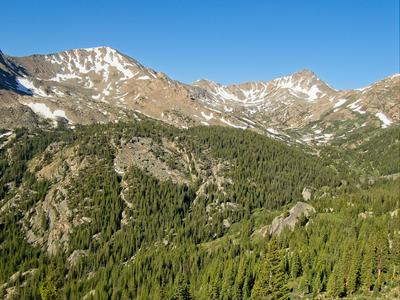 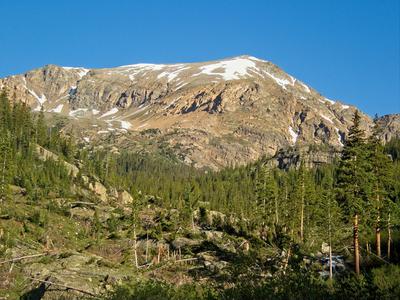 The character of the trail changes immediately after taking the turn up Mt. Massive. The grade increases immediately and essentially never lets up. For the next ~3.5km the trail is almost like climbing stairs. The views are amazing, which is important as I had plenty of time to take them in while catching my breath! The very beginning of this portion of the trail is still below the timber line, but it very quickly climbs above it and continues through alpine meadows and scree fields. There was still a little bit of snow in places, but none actually in the trail. A few other parties were also hiking the trail, but not too many. While not quite a total wilderness experience, crowding wasn't particularly bad. 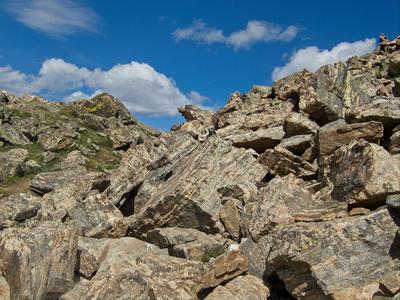 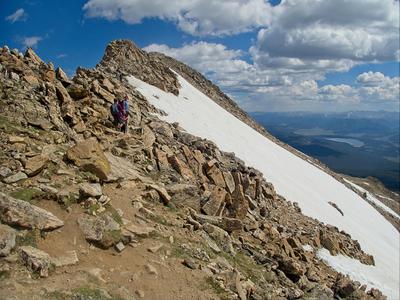 The trail joins with the main East Slopes trail about half a kilometer from the summit. From there it continues across a rocky ridge to the summit. I was very fortunate in that there was almost no wind to deal with. Unlike my time on Mt. Sherman, that meant the summit was an enjoyable place to sit and relax for a bit. There were some other people at the top, as expected, but they were also interested in enjoying the wilderness and beautiful weather. I ended up talking with two couples who were in their early 50s. Both had done extensive hiking of 14ers in Colorado and had also climbed Mt. Rainier. Listening to their stories was fun and, while I was talking with them, we got passed by Courtney Dauwalter. She had climbed up the north eastern slopes, off trail (probably following the typical north to south route for Nolan's 14) and flew by us and down the East Slopes trail. I don't know if she was just out training or if she is actually planning an FKT attempt for Nolan's 14, but it was really neat to have such a high caliber athlete casually stroll by me while I was out in the wilderness! 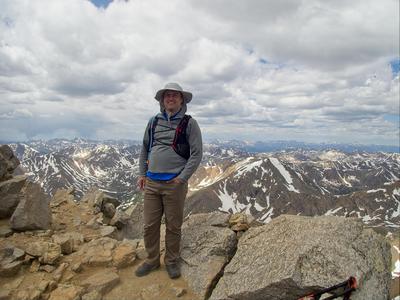 The couples I was chatting with offered to take my photo at the top, an offer I took them up on as most of my hiking is done alone so I don't get many pictures taken of me. After enjoying the view for close to 45 minutes, I decided to head back down the mountain. Afternoon thundershowers did appear to be rolling in and while the weather didn't look nasty yet, the forecast did have a fair amount of rain in the afternoon.

The hike down was mostly uneventful. I stopped for a few minutes to talk with a social worker from Arizona who had decided that 14,000 feet was as high as she was going. The rest of her party was continuing to the top, but she decided to sit, enjoy the scenery, and take a nap. A bit further down the mountin, I did end up taking a fall. I was jogging down one of the less steep sections when my calf cramped, causing me to miss my step. Other than some scrapes on my hands, however, I escaped without serious harm to either myself or my possessions. I mostly managed to avoid rain (aside from a few light sprinkles) on the way down, but within 15 minutes of getting back to my car, it started rainly fairly heavily. I was back to my car by about 2 pm, for a total car-to-car time of 7 hours, although only 6 of those hours were spent hiking. 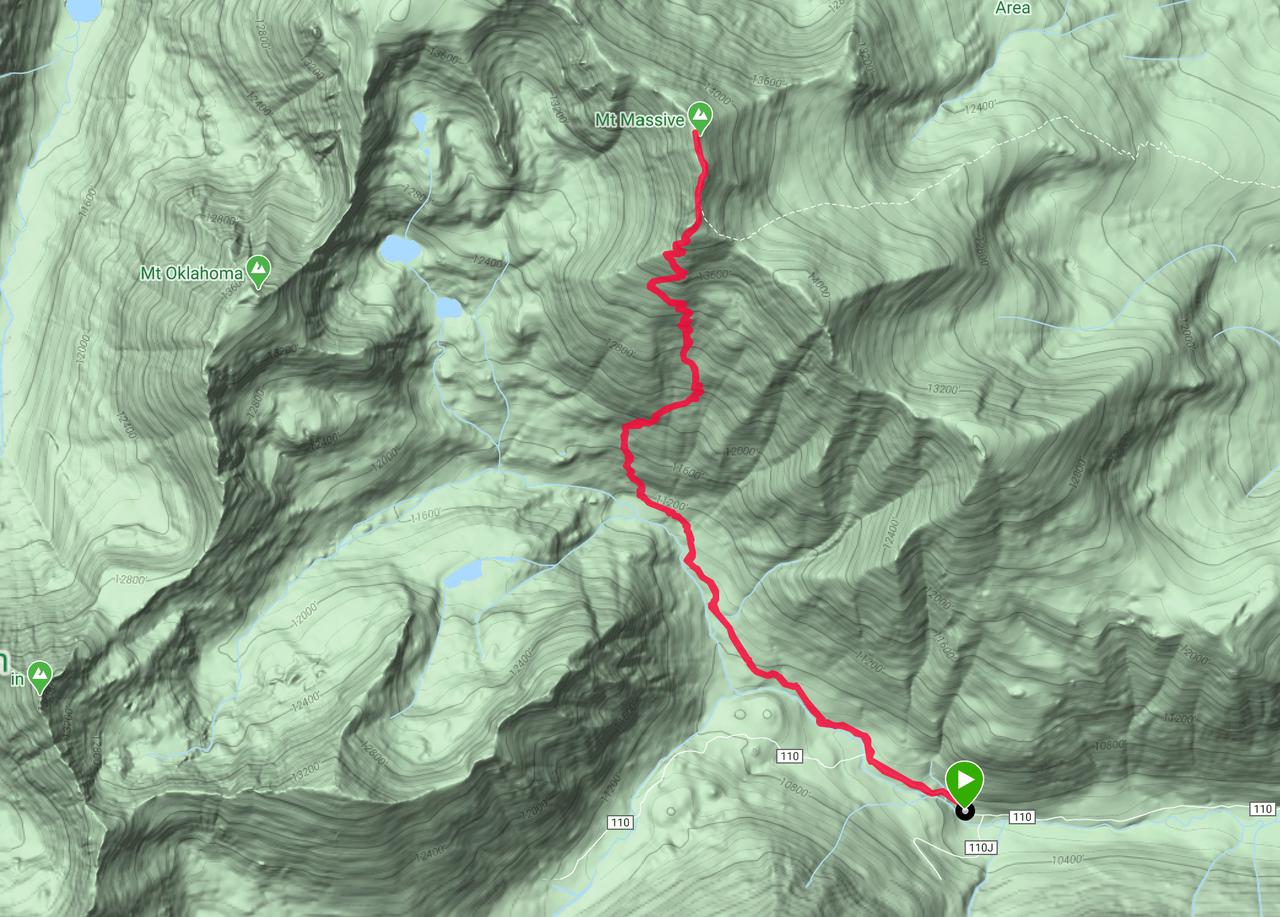