First 5k post-ACL for The Wife! 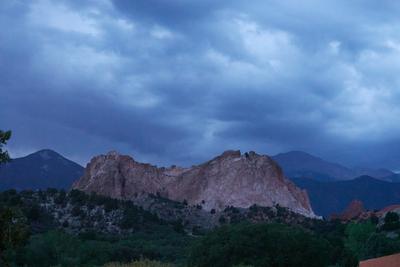 Rehab for The Wife has been going very well, including a re-introduction of running. She started doing short runs about 3 weeks ago and has gradually progressed in length. Up until this run, she had managed a maximum of 4km. We found the Starlight Spectacular, a local 5k in Garden of the Gods that benifits the local trails, that fit fairly well into her rehab schedule. The race is run in Garden of the Gods on the main road loop. The park is closed and the run starts at 8:30pm. People are encouraged to wear lights/glow-sticks as the sun has set by the time the run starts.

While I wasn't able to get photos of them, there were a good number of people wearing lighted costumes. One couple was planning on doing the run with lightsabers, another lady had a ground-length cape that was full of lights, and another lady was running in a lighted tutu with matching costumes for her two dogs.

The run itself started off as most runs in the Garden do, uphill. Part way through the initial climb up to the main parking lot, it decided to rain. The rain was accompanied by some uncomfortable winds but, fortunately, it cleared after about 5 minutes. After that, there was just enough moisture to make the air feel cool but not enough to cause problems with footing. The Wife really noticed that she was actively in rehab on the big ups as the leg on the side of her ACL reconstruction still doesn't have the power she is used to. That made the uphills a bit of a struggle. The downhills were all easy for her, though she was annoyed that I held her back some on them. No need to get going too fast and take a fall on a new ACL!

The run ended with a steep uphill to the visitor center, pancakes, and a man playing the bagpipes. There were also a number of people gathering for the bike ride that was set to follow the run. Lots of lights on bike wheels made for a fun walk back to the car.

While the run is certainly not a serious race, it was fun, different from normal races, a great way to support the local parks and trails.