Having failed to reach the top of Mt. Sherman back in May (mainly because the skiing looked so much better on Mt. Sheridan), I decided to return now that summer has officially started and hike the mountain.

This hike was actually done on June 28th. I am only now writing a post on it because I haven't been feeling super creative. 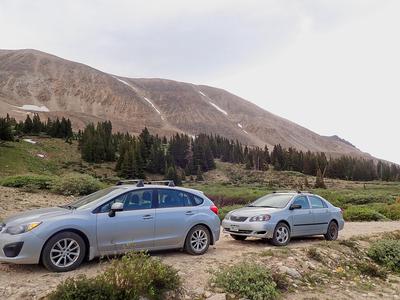 The day started out fairly early. With how busy the mountains have been this spring/summer, I wasn't sure if I would be able to find dispersal camping near the trailhead, so I just got up early and drove from Colorado Springs. I had intended to be driving by 04:30, but since I am not a morning person, that turned into setting out around 05:15. I arrived at the trailhead by 07:15. I actually parked about 1km down the road from the start of the trail. While I could easily have driven up to the actual trailhead, I wasn't sure if there was going to be parking available and I was planning on doing a loop hike/run. The loop would intersect the road about 1.5km downhill from the trailhead and I decided I would rather do my climbing at the beginning of the day rather than the end.

Initially, the weather did not look very good. When I parked, the sky was almost completely overcast. There wasn't any actual rain, but I was half way expecting to abort the hike within the first half an hour. By the time I had climbed up the road to the trailhead, however, the sky had cleared. Though somewhat angry clouds continued to blow over from the west, I had several hours of good weather. 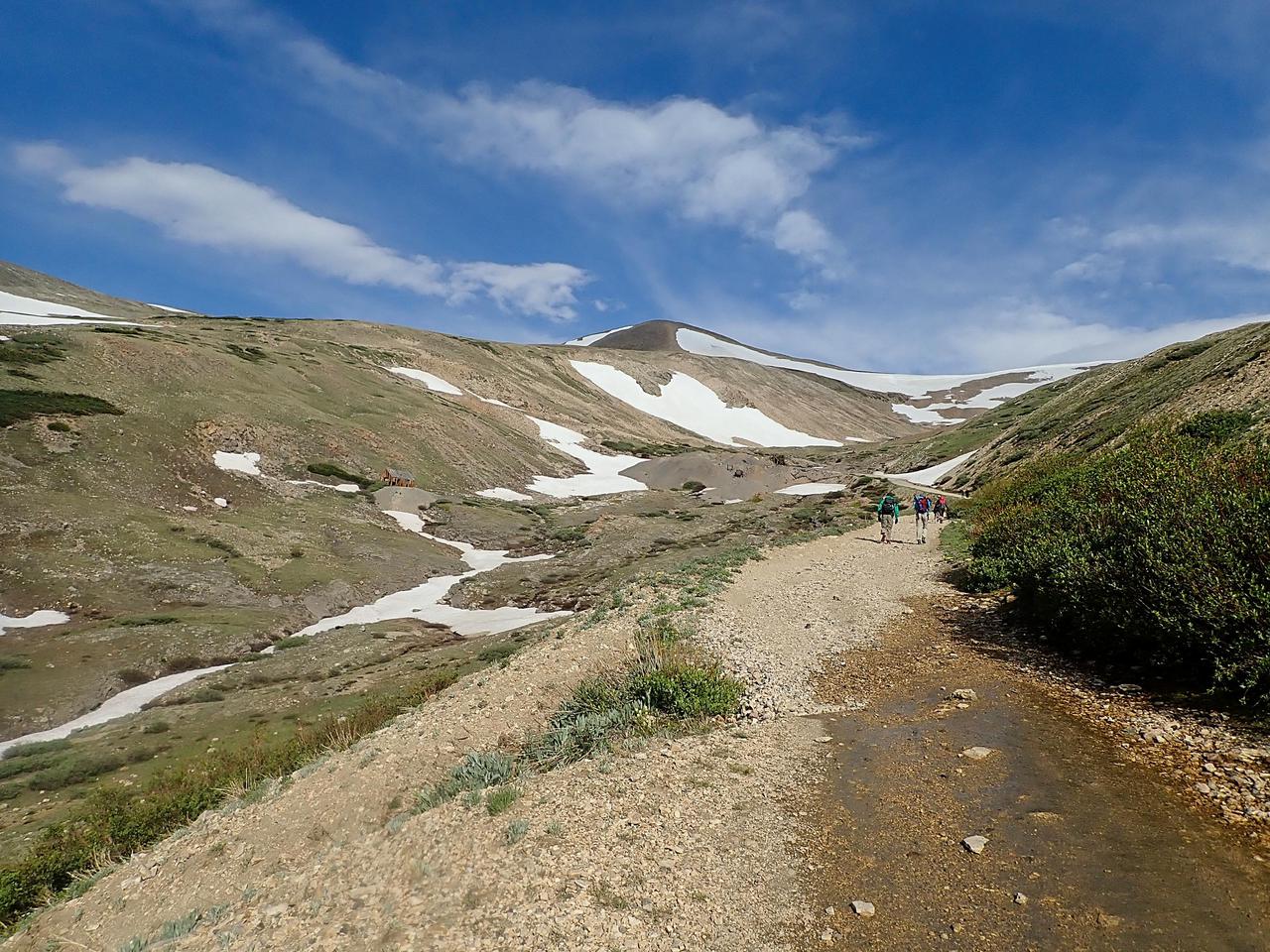 My plan was to speed-hike the portions of the trail that were too steep to run. While I am sure that many people with a better fitness level could have run some of the trail on the way up, I found it to be much too steep. Instead, I was left speed-hiking most of the distance. There were a few spots that leveled out enough for, perhaps, 50 meters of running, but the trail had a fairly constant and steep grade up. 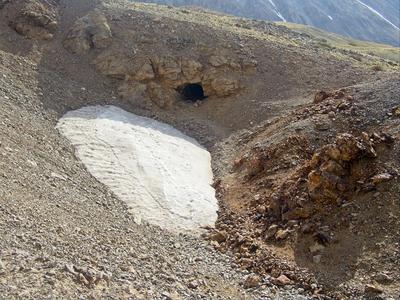 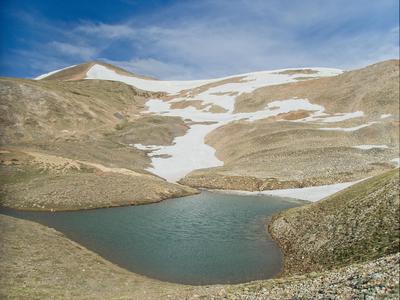 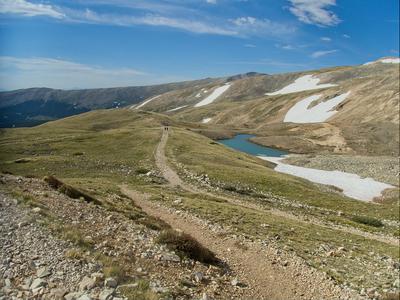 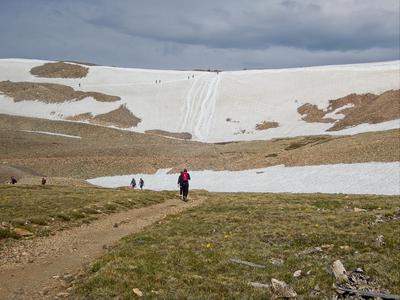 For the most part, the trail was free of snow. There were sections that remained fairly wet due to melting snow. This changed when I arrived at the headwall below the saddle between Mt. Sherman and Mt. Sheridan. This section of the trail traversed a fairly steep (perhaps 45-50 degree) snowfield. A loss of footing here would not have been fun without an ice axe to slow descent! 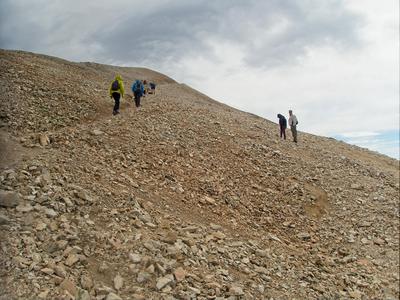 From the saddle, the trail increased in steepness. The wind also began to pick up considerably. There were times when wind gusts were probably close to 60mph. Fortunately, the trail mostly runs just below the ridge so there were some respites from the wind. The wind made it quite cold, so I was glad to be wearing a fleece. I wished I had a good winter hat instead of just one of my sweat-wicking baseball caps! One item of note was that there actually were people climbing the mountain wearing masks. Somehow, I'm reasonably certain that your risk of contracting COVID is relatively low when you are climbing a 14er in 60mph winds!

Unfortunately, the top of the mountain was both windy and the site of a party. A group of college age people were at the top of the mountain blasting music through a battery powered speaker and drinking beer. While I have no problem with them engaging in either of those activities, I do wish people would understand that most of us head out into the wilderness and climb mountains to get away from civilization, not be reminded of our college days!

I decided not to stay at the summit very long due to the festivities. Despite somewhat questionable weather, I started climbing up Mt. Sheridan after I had descended to the saddle. The climb up Mt. Sheridan was much more of a wilderness experience. It was also quite steep and the footing was not as good as the trail going up Mt. Sherman, mainly because not as many people climb it. Shortly after I arrived at the top, I was joined by two guys from Denver. They, too, had climbed Mt. Sherman and had also agreed that the party on top had sort of ruined their wilderness exeprience.

I continued my hike, descending the eastern ridge of Mt. Sherman, and continuing on to Peerless mountain. I had initially planned on continuing along the ridge and climbing Horseshoe Mountain, but upon descending to Horshoe Pass, was quite tired. Nasty looking clouds had also rolled in and the afternoon thunderstorms looked ready to start soon. I made the decision to leave climbing Horseshoe Mountain for another day. Heading down mining roads from Horseshoe Pass back to my car took longer than I had expected. It was during my periods of running down the mining roads that I decided my current New Balance KOM running shoes needed to be retired. The midsole has become so worn out that I was feeling every little rock edge, a situation that becomes progressively more uncomfortable the more sharp rocks you end up stepping on! 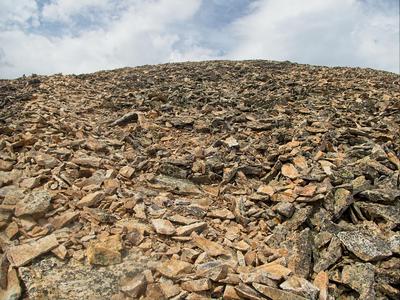 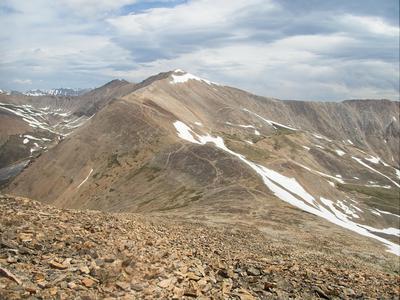 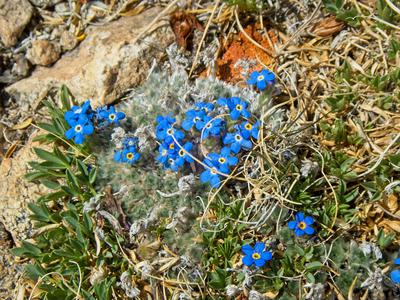 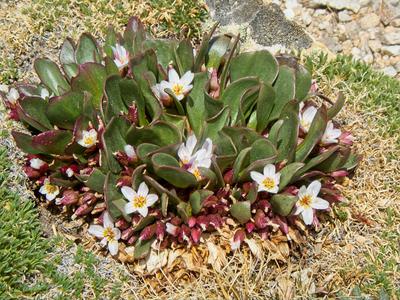 Total moving time today was 4 hours 23 minutes with an elevation gain of 1250 meters. Total distance was 14.4 kilometers. Shortly after I got back to my car, it started thundering and raining, making me all the more thankful that I had decided not to climb Horseshoe Mountain.