If you haven't heard of the Stryd running pod, you should go check out their site.

Essentially, this device is a foot-pod, meaning it is a small piece of gear you clip to the laces of your running shoes. It is advertized as a running power meter. There is a fair amount of debate about how closely the number the device and the company's software comes up with corresponds to your actual running power output, but in my experience, I does a good job of providing a reproducible level of effort. 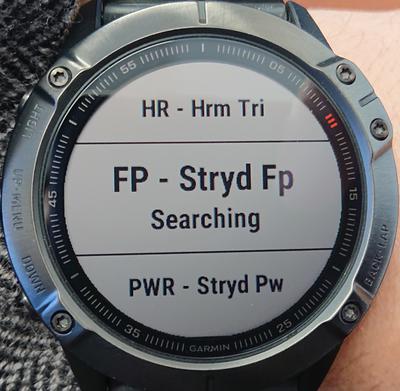 I have used the footpod with both a Garmin Fenix 5x and a Garmin Fenix 6x. On both of them, setup is fairly simple. The only tricky part is that you actually need to add two devices, both a footpod and a power meter, as well as setting the Speed and Distance fields under the footpod to "Always". You also need to install the Stryd Zones Garmin IQ Data Field and add it as a ConnectIQ data field to each activity where you want to monitor power.

The Stryd website has a good section on setup.

Use is very straightforward. Put the device on one of your shoes, move your feet around a little to wake it up, start an activity on the watch and wait for a message that the footpod and power are connected. From there you just run/hike as normal.

Battery life, as reported by Stryd, is about 20 hours of continuous use. I have never had an issue with running out of battery power on any individual hike/run I have done, although I haven't recorded an activity of more than 8 hours.

First issue with my model is that it uses wireless charging. That means the device is not going to charge well in a car/on a bumpy road. It also means you have another propriatary charing connector to keep track of. I understand that with a later version (I have what I believe they refer to as version 2) they abandoned the wireless charging, the device still uses a propriatary connector to charge. I know this is probably done to help with waterproofing and keep size down, but it sure would be nice if I could just use a standard micro-usb or usb-c connector to charge it like with all my other electronic devices.

Second concern is with waterproofing. I can't seem to find an actual specification on their website for waterproofing. I have read in some online reviews that it is IP67 (up to 1m) rated. As someone who does a lot of hiking/running in the mountains, stream crossings are a common occurrence especially in the spring. While I haven't had any trouble with the device, it would be nice to hear officially that it was built to withstand those conditions.

Third issue is with battery life. The battery life is certainly long. I will typically go for a week or two without charging it. However, other than the light on the device starting to blink, there is no low-battery warning. There has been a time or two when I didn't realize I was low on charge (including one race) and had the footpod drop out mid-activity. Fallover to GPS tracking on the watch was handeled seemlessly, however losing a power reading on a hilly trail run was unfortunate. It seems that there should be some way for the company to include battery monitoring with their phone app and have a push notification when the charge was below a certain cutoff.

Also, it would be really nice to see an option for a slightly larger footpod with extended battery life. While I am not doing them yet, I do live in an area where ultras are a big thing and many people running an ultra need 24-30 hours of battery life. It's a small thing, I know, and only appeals to a small segment of the running population, but the company is based in Boulder so they should be well aware of this market segment!

Despite the above mentioned concerns, I would whole-heartedly recommend the device. It does an amazing job of measuring distance and pace without needing any calibration (see https://fellrnr.com/wiki/Stryd#Testing_Distance_and_Pace for a good review of accuracy) and the power number is a great training aid. While I am not convinced that their own online training platform adds much beyond Training Peaks, it is being constantly worked on. If mine were lost or broke, I would be ordering a new one immediately.