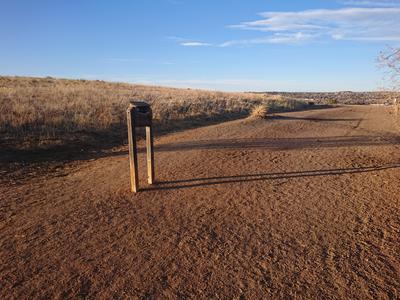 Today was my second day actually back running after my knee injury in late January and fortunately, the weather decided to cooperate. A lot of February has been fairly cold/windy so doing anything outside has been a real chore. This is such a difference from my normal experience in Colorado Springs during the winter! I could count on the fingers of one hand the number of days this past month where it was in the 50s by the end of the work day. So I headed to Palmer Park afer work to take advantage of the day and of some relatively flat dirt trails (please emphasize "relatively"). Due to snow earlier in the week, there was some mud, though the main trails were mostly clear. Lots of people were out with their dogs also enjoying the weather.

My goal was to run for an hour and keep my heart rate squarely in zone 2 (which for me currently in the 140-150 range). I was successful with the heart rate, however I was not able to run the entire time as there were enough hills that my heart rate would spike. So I had to do a little bit of walking up the hills. Altogether, I ran for just over an hour, covered 6.4km, and had about 85m (that's about 270ft) of elevation gain according to my Garmin activity. So much for flat! But that is what I get for living in the mountains.